Image editing by painting a mask and specifying any text description to guide the image generation. TL;DR: Just train a StyleGAN / BigGAN generator and then, to edit an image region, just optimize the masked latent code using pretrained CLIP as a loss.

In this post, I will give a brief overview of the recent paper from MIT Paint by Word. Authors introduce a novel method which is to be able to paint in an image arbitrary new concepts described by text at any specific location provided by the user in a form of a mask. The proposed Paint by Word method can also generate a full image just based on a textual description.

TL;DR: Just train a StyleGAN / BigGAN generator and then, to edit an image region, just optimize the masked latent code using the similarity of the image and text in pretrained CLIP encoder space as a loss.

Point to a location in a synthesized image and apply an arbitrary new concept such as “rustic” or “opulent” or “happy dog.”. Then a new image can be generated (see image below).

Method in a nutshell

(1) a semantic similarity network \(C(x, t)\) that scores the semantic consistency between an image \(x\) and a text description \(t\). It consists of two subnetworks: \(C_i(x)\) which embeds images and \(C_t(t)\) which embeds text.
(2) generative network \(G(z)\) that is trained to synthesize realistic images given a random \(z\); this network enforces realism.

To focus on changes in a local area, we direct the matching network \(C\) to attend to only the region of the user’s brushstroke instead of the whole image. To do this we extract the latent representation \(w=f(z)\) of the image and mask it using the user’s input and optimize only the masked region of the representation. In BigGAN experiments authors use the first convolutional block as \(f\) and its output is then \(w=f(x)\). In StyleGAN, \(w\) is the style vector. 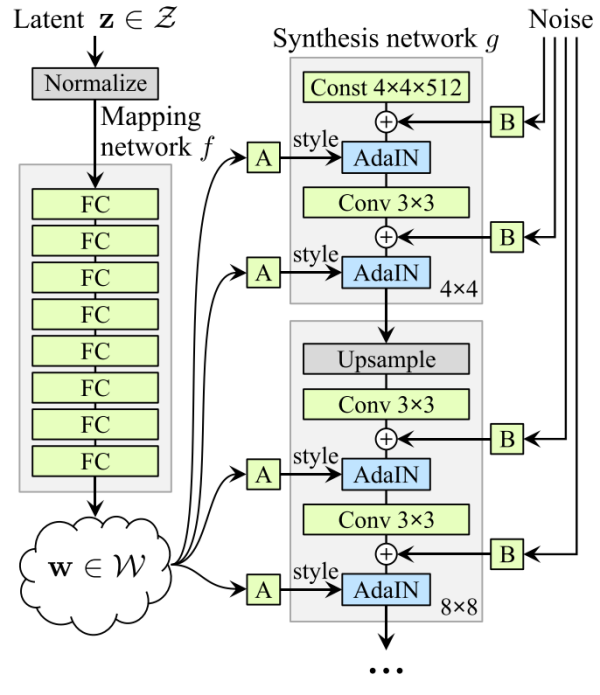 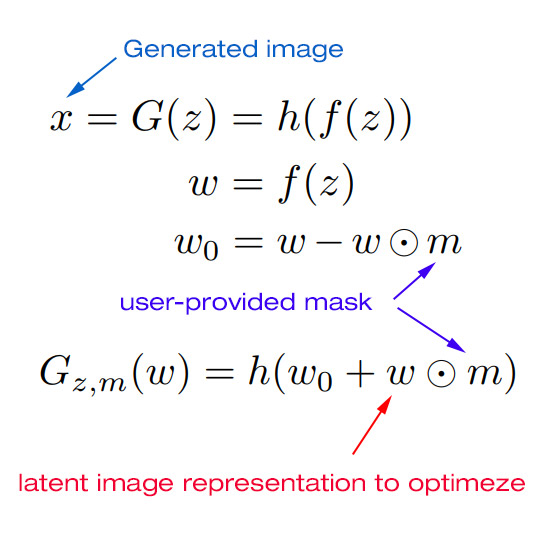 To match the input textual description, we embed the output image \(x\) and the text \(t\) using networks \(C_i(x)\) and \(C_t(t)\) and maximize the similarity between these embeddings by backpropagating the gradients to the masked latent representation \(w \odot m\), but not to \(w_0\) (which corresponds to the region outside of the mask).

Symmary of the used losses: 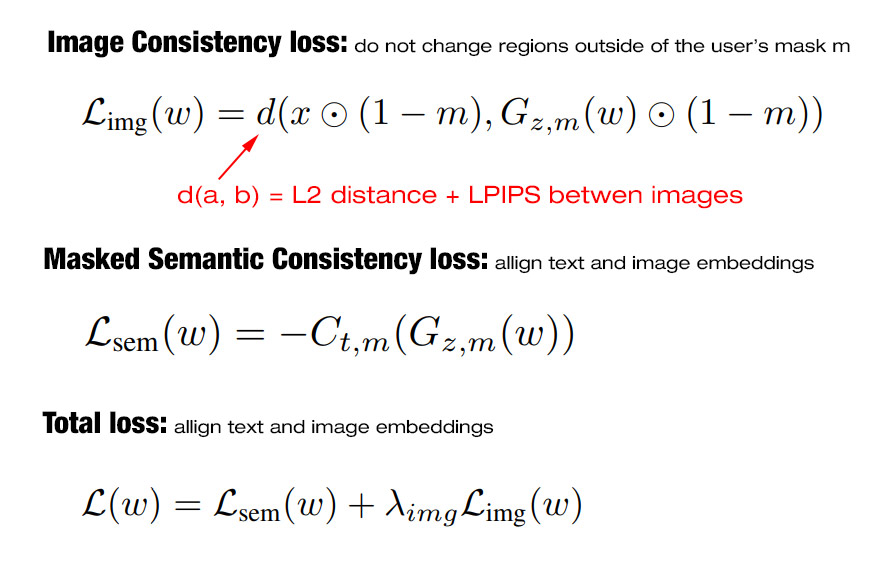 Here is the loss ablation study. Masking the output image (c) vs masking the latent representation (d) for backprop. This shows that naive implementation is inferior to the proposed masking of the latent vector \(w\). 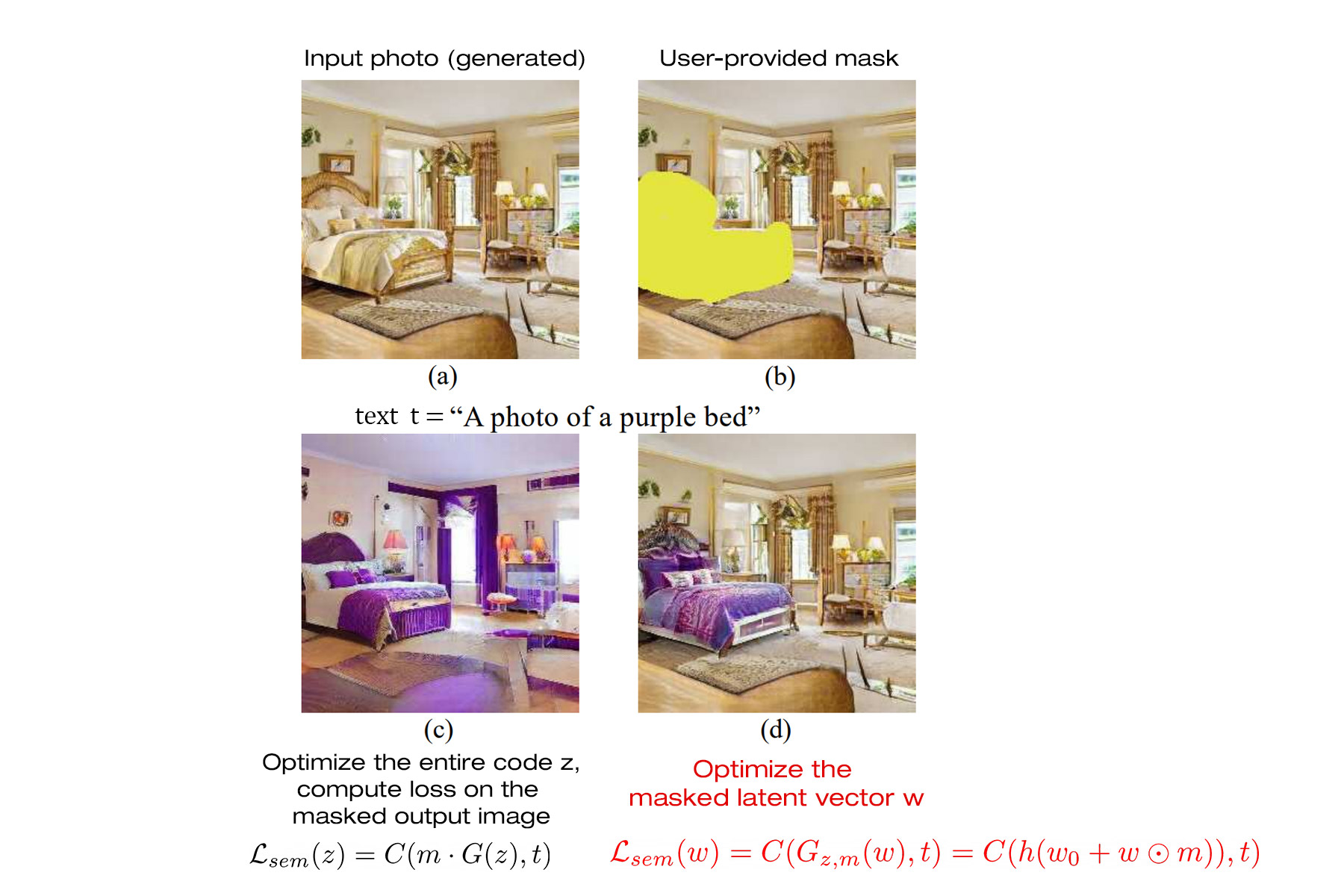 The proposed method has a simpler architecture than DALL-E and it does not explicitly train the generator to take textual description as input to the generator. The textual information comes only from the semantic loss.

For \(G\) authors train a 256-pixel StyleGAN2 on the CUB dataset. And for \(C(x, t)\) authors use an off-the-shelf CLIP model. The network is trained only on birds and it utterly fails to draw any other type of subject. Because of this narrow focus, it is unsurprising that it might be better at drawing realistic bird images than the DALL-E model, which is trained on a far broader variety of unconstrained images. 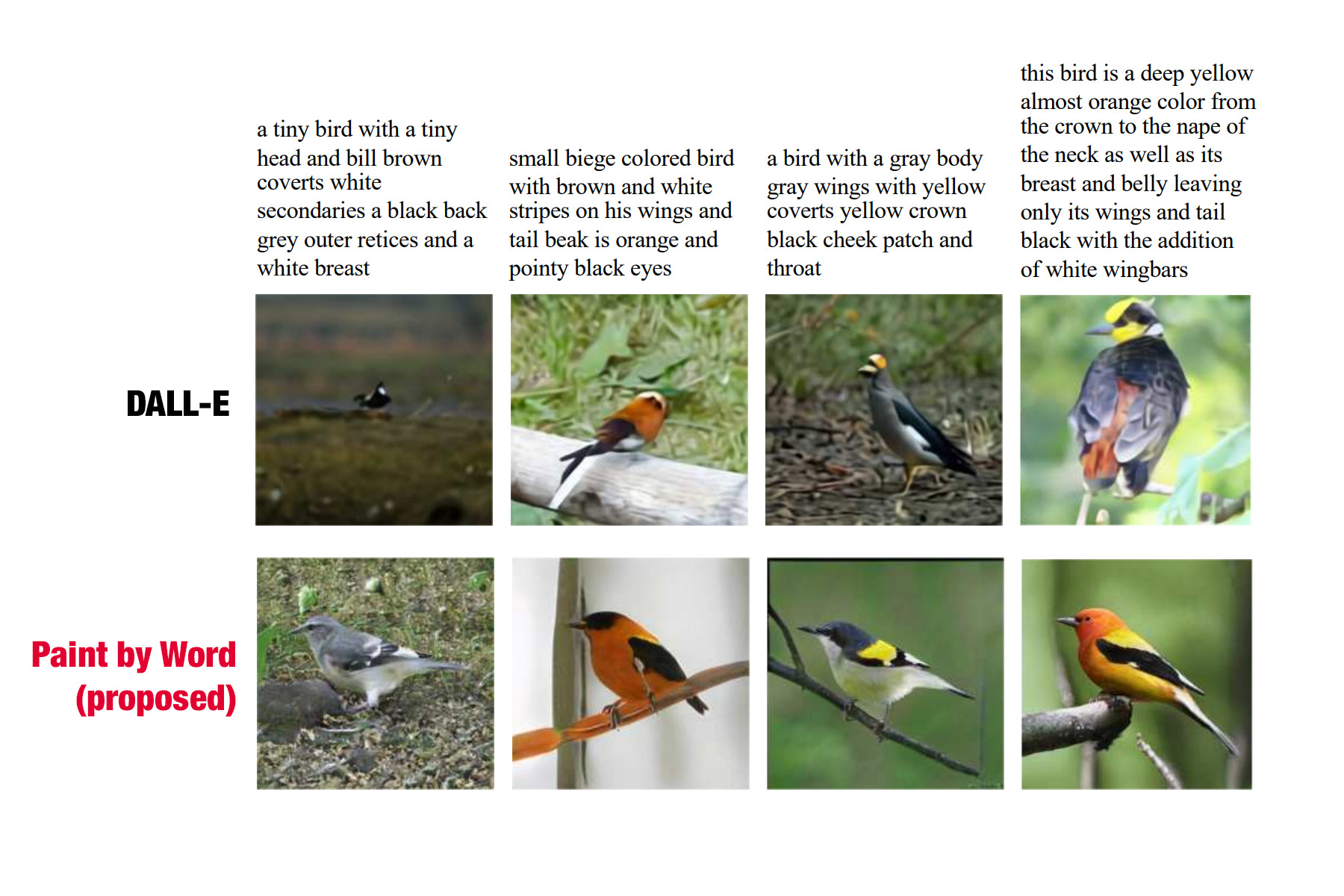 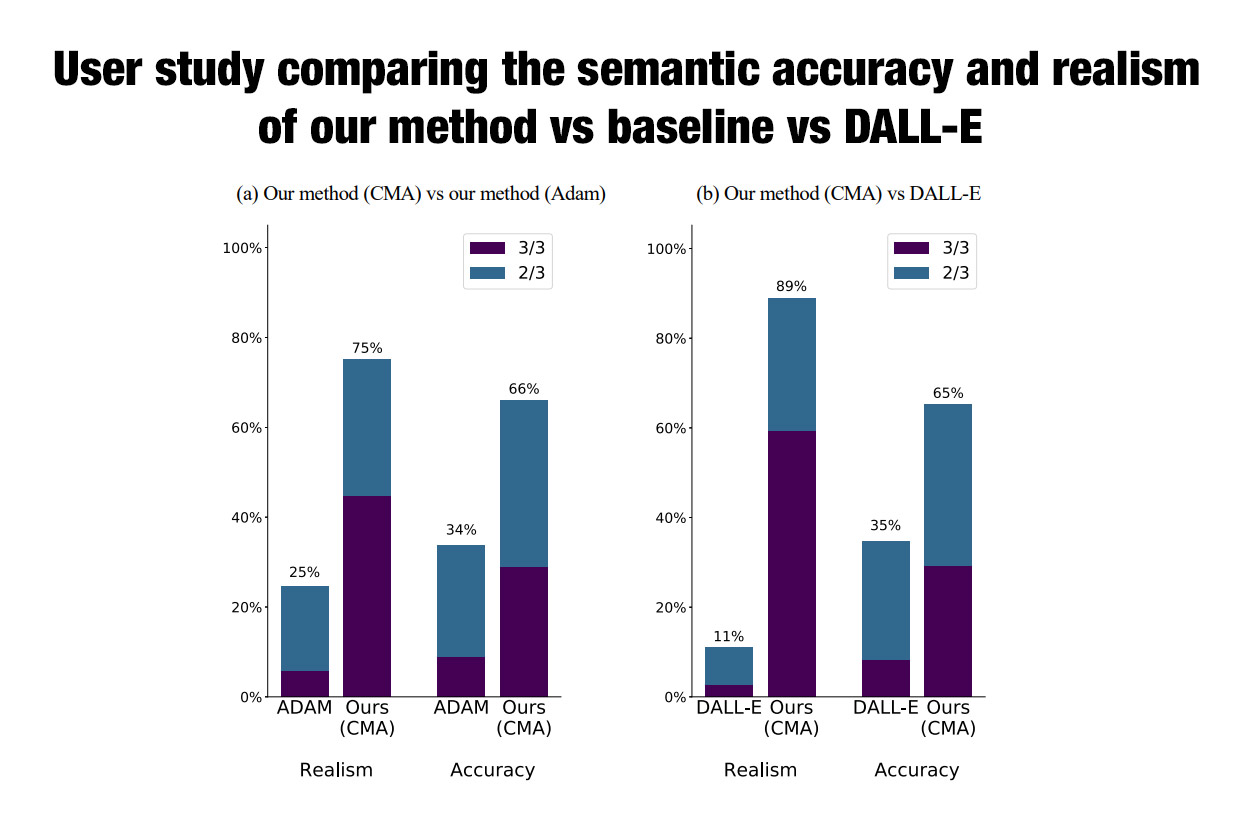 Nevertheless, this experiment demonstrates that it is possible to obtain state-of-the-art semantic consistency, at least within a narrow image domain, without explicitly training the generator to take information about the textual concept as input. 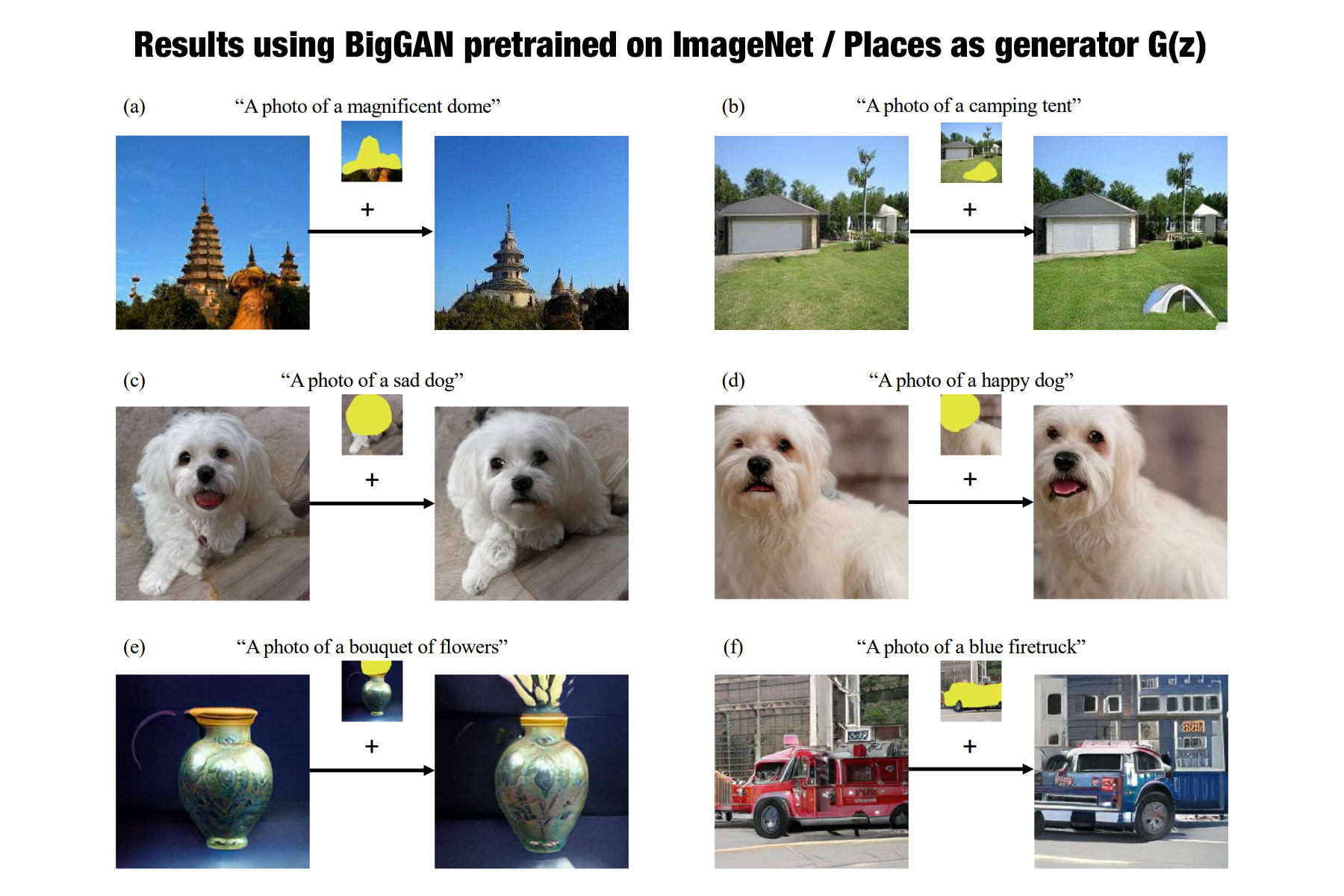 To conclude, this paper shows that even such a simple method can produce pretty amazing results.

🔥Just train your StyleGAN / BigGAN generator and then edit an image region just optimize the masked latent code using pretrained CLIP as a loss. That’s it!

📝 Arxiv paper: Paint By Word
🌐 Related blogpost: How to easily edit and compose images using GANs like in Photoshop

Feel free to ask me any questions in the comments below. Feedback is also very appreciated.